After months of working on grueling college applications, Daisy anxiously opened her admission decision emails. One after another, the letters informed her that she was not being offered a spot in their film school programs.

Daisy was crushed. “I thought it was the end of the road. I figured I would never go to film school. It wasn’t until I started at community college that I even realized transferring into a four-year program was a possibility.”

Shortly after, Daisy began her first semester at Santa Monica College. “Initially I felt bad that I didn’t go to a four-year school right after high school. People have this idea that students who attend community college don’t know what they are doing with their lives, but I found out that is not the case. Spending a year at SMC further helped me decide what I wanted to with my career and propelled me down the path to get there.”

After taking classes in Chicano Studies and hearing stories from Latinx authors, Daisy was inspired.  “For the first time in my life, I heard stories from people I could identify with. This ignited a passion in me to share the experiences of underrepresented groups through film. Taking these courses solidified my desire to pursue Film and Media Studies at the University of Southern California.”

A few months later, Daisy again applied to film school. She was nervous but felt confident knowing the time at SMC had prepared her for this next step. “When I found out I was admitted, I couldn’t stop crying. I felt very proud of myself for working so hard to get to this point. I was even happier knowing I had received the Live Más Scholarship. Without it, I wouldn’t have been able to afford to transfer.” 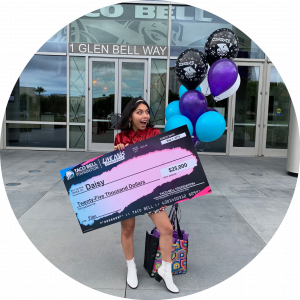 Here are Daisy’s tips for transferring:

Currently Daisy is studying at USC and loving it. “Transferring can be overwhelming but is absolutely worth it. Being a part of this community is very special and every day I feel grateful to be here.”